“The energy transition in Asia - The role of liquefied natural gas and implications for East African producers”.

Etienne Romsom and Kathryn McPhail, authors of “The energy transition in Asia - The role of liquefied natural gas and implications for East African producers”, have published their report with UNU-Wider.

This 36-page report provides an overview of the use of natural gas and Liquefied Natural Gas in Asia, both historic, current and with an outlook for the future.  Traditionally, Asia has been a strong Liquefied Natural Gas producing region as well as the premier Liquefied Natural Gas market.  This continues to be the case today and it is expected to continue as well in the future.  There are significant lessons to be obtained from the Asian gas market for other new Liquefied Natural Gas producing nations and developing gas markets, such as Mozambique.  This report also describes potential developments in the Energy Transition and how these affect the role of (and demand for) gas going forward in Asia.  Asia is expected to be the largest growth market for gas worldwide during 2018-2035, although drivers do vary per country and depend on the degree of disruption caused by the growth in electrification and renewables.

The conclusions of the report are provided here:

LNG has a key role in Asia

Asia has an established LNG market, with existing infrastructure that is rapidly expanding across the region. Whereas before there were few suppliers and few buyers, there is now much more diversity on both sides of the market.  In particular in the smaller markets in SEA, there is a proliferation of LNG regassification facilities to supply increasing power demand and to substitute declining domestic gas supply.  Worldwide, LNG is growing significantly faster than domestic gas and international pipeline gas.  On LNG demand growth, China stands out as having recently overtaken S. Korea as the world’s second largest LNG importer after Japan.  China’s long-term energy demand growth, however, is expected to slow considerably from 6.3% to 1.5% cagr.  By 2040, the share of gas in China’s energy mix will have increased from 6% to 13%, but by then will still be less than half of coal’s share (36%).  In terms of market potential, India stands out as a key opportunity, but with a less well-orchestrated strategy, there is less clarity about how the energy mix will evolve.

On the supply side, limited further LNG supply growth in SEA is expected, driven by smaller projects enabled by FLNG and cost efficient expansions of existing LNG infrastructure. The next wave of LNG supply is expected to be dominated by North America (+48 mtpa), Qatar (+23-30 mtpa), Australia (+17 mtpa), Mozambique (+15 mtpa) and PNG (+8 mtpa).  The clearing of a large volume of available North American gas into LNG supply may delay FIDs for other greenfield projects.  Singapore is well positioned as an LNG bunkering hub, a strategic LNG storage facility, an LNG trading hub (including a potential LNG price marker) and an International Arbitration Centre (SIAC).

The global LNG market oversupply after 2015 and the associated fall in global gas prices changed the traditional LNG business model.  Long term contracts (some lasting decades), which incorporate windows for contract terms, pricing reviews and arbitration, are now being complemented by a growing share of contracts with shorter duration and higher volume flexibility. Shorter contracts and gas-on-gas competition have reduced the linkage of LNG to oil prices, stimulating growth, but also creating more price volatility.  Some projects, such as LNG Canada have taken FID without secured long term contracts (and therefore without project financing).  Key differentiators for new LNG supply projects include cost competitiveness, strong balance sheets and performance track record.  For greenfield LNG projects, the design and management of the LNG value chain is a key focus for due diligence by financial lenders and LNG buyers.

LNG has a strong value proposition to contribute to the Energy Transition, but the gas-for-power growth could be lacklustre in many countries in Asia

A rapid increase in electrification globally is going to have a large impact on the energy market both globally as well as in Asia.  Global electricity demand is expected to grow at four times the growth rate of other fuels. In 2016, renewables grew faster than fossil fuels in terms of installed electrical power capacity, but they start from a much smaller base and with lower average utilisation for wind and solar. In non-OECD Asia excluding China, new coal-fired power gained significantly in 2015 and 2016, against other energy sources, including NG.  Even in China, coal is expected to remain the largest energy source,  although its share in the energy mix is forecast to decline from 62% (2016) to 36% (2040).  In comparison, the share of NG in China in the same period is expected to grow significantly, more than doubling from 6% to 13%.  Nonetheless, NG (and LNG) is struggling for market share in most electricity markets. As a consequence, market opportunities are being promoted for gas demand growth, including petrochemicals and LNG-as-transportation-fuel.

The energy transition is very geography-and situation specific and needs to take into account several factors including in-country local contexts, and the particular opportunities these offer.  More effort is needed by gas producers (transporters and consumers) to demonstrate that NG and LNG is a superior fuel compared to other fossil fuels, particularly in a symbiotic energy mix with renewables. More transparency is required to verify and certify the extent of any methane and CO2losses in the gas value chain and pursue actions to mitigate these (such as carbon capture and sequestration). 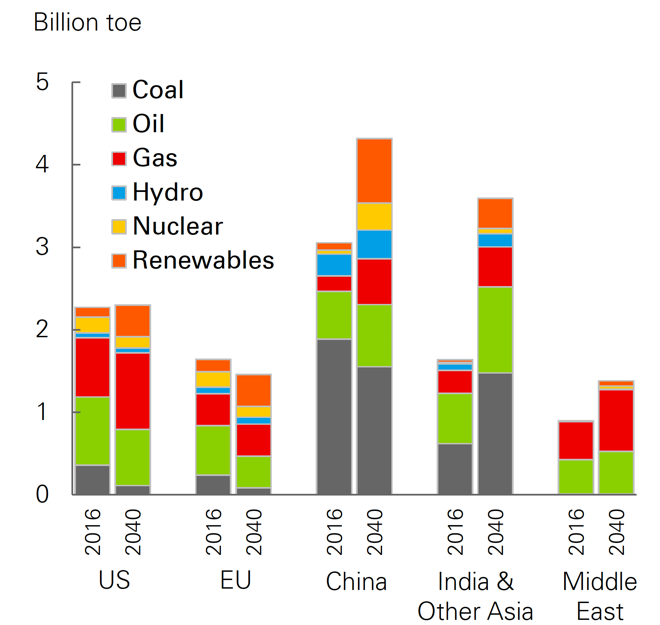 Figure :The primary energy demand forecast by fuel and region shows significant differences in energy mix for different regions. China stands out as the world’s largest energy consumer (now and in the future) and as the second largest energy growth region (in billion toe) after India & other Asia. (Source: BP’s Energy Outlook 2018).

Governments and institutions advising governments play a crucial role in steering the energy mix. Increasingly, externalities, such as air quality and its impact on health, need to be ‘priced in’ when making decisions on energy policy and projects.  The affordability assessment with respect to energy needs has to look beyond commodity prices and project financial returns.  Singapore is the first country in SEA to introduce a carbon tax, starting in 2019. As 2018 Chair of Association of South East Asian Nations (ASEAN), it is well positioned to support ASEAN countries in establishing a more aligned approach on policies supporting the energy transition.  The technologies are mature, what is needed is a mature stance of producers, consumers, regulators and governments to address the true cost of energy and its emissions in their economic assessments and financial obligations.  In particular, the gas sector and the renewables sector need to collaborate much more closely to capitalize on the opportunities for symbiosis between these two energy sources of the future.

Assessing the economic fall out from the COVID-19 pandemic for oil, natural gas and LNG

This paper has been written in response to questions how the COVID-19 pandemic will affect the oil and gas globally, both in the short-term (2020/2021), as well as any systemic impact that will have long lasting implications for oil, natural gas and LNG.

Etienne Romsom and Kathryn McPhail, authors of “The energy transition in Asia - Country priorities, fuel types, and energy decisions”, have published their second report with UNU-Wider.

UNU-WIDER Development Conference held in Helsinki 13-15 September 2018, showcased UNU-WIDER, its work, and the many people and institutions that are engaged with it.